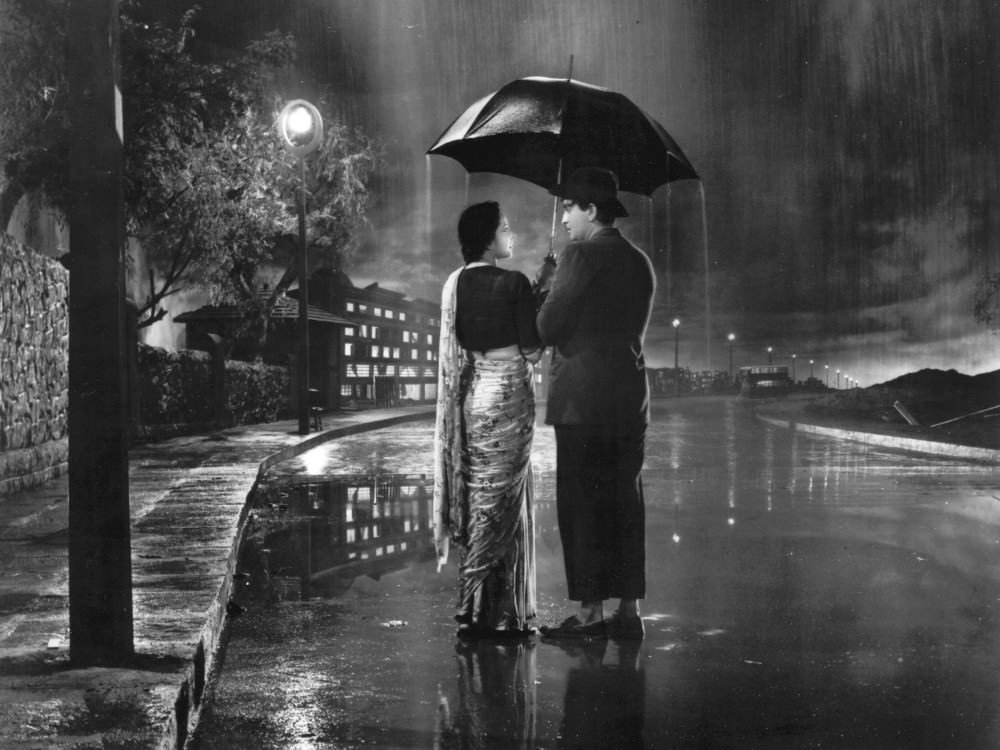 Directed, produced, and starring Raj Kapoor, arguably Hindi cinema’s most canonical actor, Shri 420 (Mr 420) was India’s highest grossing film in 1955 and is widely remembered for its song “Mera Joota Hai Japani” (“My shoes are Japanese”). Shri 420 follows the unemployed young man Raj (played by Kapoor) who is styled in the manner of Charlie Chaplin’s little tramp. He has migrated from small town Allahabad to urban Bombay dreaming of fortune, his B.A. certificate and a gold medal for honesty among his few possessions. In Bombay he meets and falls in love with the teacher Vidya Shastri, played by Kapoor’s regular co-star Nargis (also see Barsaat/Rain [1949], and Awara/The Vagabond [1951]). In an early encounter with a beggar, after Raj affirms that he is both educated and honest, he receives the premonitory response, “This is Bombay. You will not find employment with those qualities.”

The film’s title refers to the section of the Indian Penal Code that covers “Cheating and dishonesty including delivery of property”. This title signifies Raj’s transformation as he becomes a gambler and conman, rejects Vidya, and is generally corrupted by the city through his involvement in schemes which exploit the city’s rich and poor alike. Having spent much of the film justifying the rights of the poor to bend the rules for a more comfortable life, Raj eventually realises the effects of his dishonesty upon his integrity and others, delivering a speech to his former homeless friends:
“I am one of you. When I came to Bombay I had everything: integrity, education, the aspiration to be a rich man, to have a home, a family, raise children who would grow up to study in a school and college. But because of my greed I lost everything. And today I have nothing but regrets. But blessed be the person who saved me from continuing in the world of deceit and trickery, who told me that the solution to poverty and unemployment is not greed and deceit but courage and hard work. The solution is the nation’s development and people’s unity”.
Raj is subsequently reunited with Vidya and the film concludes with their travel to an unknown destination.

The song “My shoes are Japanese” references Raj’s Indian identity despite his multi-national attire. He sings “My shoes are Japanese, these pants are British, a red Russian cap on my head, but still, my heart is Indian”. For Sumita Chakravarty (1993), Shri 420 conveys a nationalist ideology that effaces economic inequality: “By transforming the social marginality of the filmic hero into the centrality of the Indian citizen, material needs are displaced onto a more intangible (emotional) level of experience.” Jyotika Virdi (2003) suggests this film also cites a common opposition between an Indian spiritual or emotional life against a Western investment in consumer culture. Produced in the post-Independence era, Virdi (2003, 93) writes that Shri 420 “is embedded in populist commentary embraced by Hindi cinema under Nehruvian influence.” Like the black and white film itself, moral questions are starkly presented, most obviously in Raj’s two love interests: Vidya, meaning knowledge, and the cosmopolitan femme fatale Maya, “referring to the world’s illusory nature in Hindu philosophy” (Virdi 2003, 94). The film’s message is ultimately a conservative one, identifying that deceit is perpetrated by both the rich and poor, and that hard work is required to elevate oneself from poverty. In this way, Virdi (2003, 97) submits that “Shri 420 addresses the contradictions between commitment to the nation and the Herculean challenge posed by meeting the needs for food, shelter, clothing, and education.” – Liam Grealy