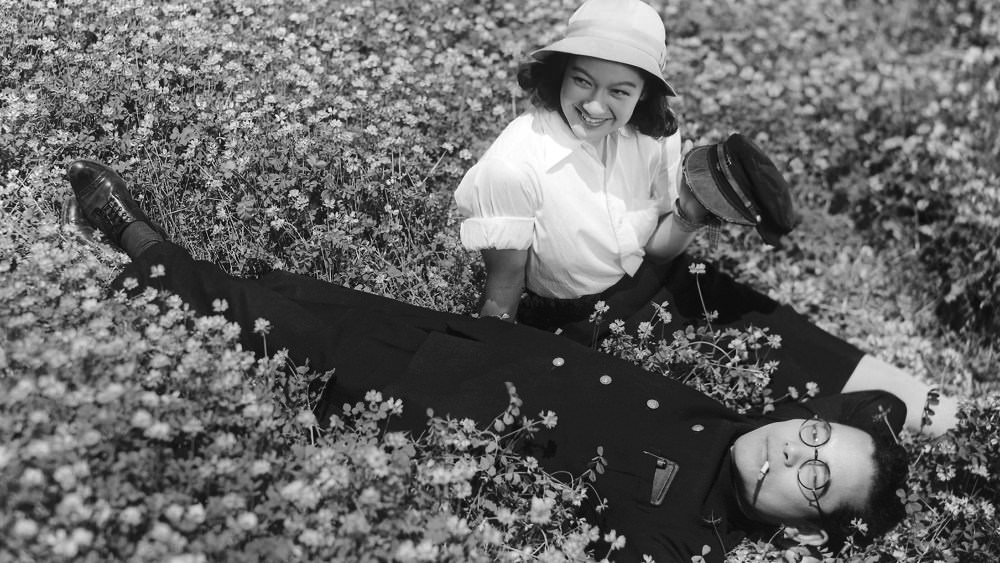 Akira Kurosawa’s fifth film, his first following World War Two, and the only one to feature a female protagonist, was loosely based on historical events, specifically the “Takigawa incident”. In No Regrets for Our Youth (Waga seishun ni kuinashi, 1946, Toho Studio), Kurosawa’s screenplay draws on the suspension from teaching of Kyoto Imperial University Law Professor Takigawa Yukitoki, for his pro-Communist views (Chow 2007). After his faculty colleagues resigned in support, and students and others organised public protests, Takigawa was formally relieved of his position at the university. Kurosawa combines this incident with the life of Hotsumi Ozaki, who was the only Japanese citizen to suffer the death penalty for treason during WWII, having assisted the Soviet agent Richard Sorge. Based on his expertise on Sino-Japanese relations, Ozaki was invited into Prime Minister Fumimaro Konoe’s inner circle, or “breakfast club”, from 1938, from which point he could convey relevant information to Sorge. No Regrets for Our Youth draws liberally from these events to convey a broadly humanist position on the restrictions and crimes of the Japanese wartime government. This position is very much in line with the U.S. Occupation’s encouragement of “democratisation” films, albeit one that privileges Japan’s rural past and a woman’s filial duty in the depiction of the protagonist’s development (see Chow 2007).

No Regrets for Our Youth begins in 1933 with student protests at the Japanese invasion of Manchuria and with Professor “Yagihara” relieved of his post for anti-fascist politics. Yagihara’s daughter, Yukie (Setsuko Hara), is being courted by two of the professor’s students, Itokawa and Ryukichi Noge. While the former is led by familial duty to focus on his studies, Noge is a young radical, becomes Yukie’s love interest, and is arrested following a protest. Yukie lives in her parents’ home until the now-public-prosecutor Itokawa and Noge return five years later, Noge having been imprisoned for four years but now claiming to have abandoned his former activism. Instead, Noge has joined the army and is due to be posted to China. Once he departs, Yukie decides to leave her parents’ home for Tokyo, where she works for three years as a manual labourer. This is an obvious transformation for the piano-playing daughter of bourgeois parents and signals a loose affiliation with Noge’s politics. Via a chance encounter with Itokawa, Yukie again meets Noge, who is now living in Tokyo, and they marry in 1941. However he is subsequently arrested and dies in prison before his trial, having been accused as a spy. Yukie then travels to Noge’s parents’ farm with his ashes, and slowly earns their respect by tilling the rice fields. At the conclusion of the war, she remains in this rural village and is a local proponent of democratic reform.

The film follows Yukie’s choice to love Noge, and her subsequent suffering, with “no regrets”. Kurosawa’s themes correspond closely to the Occupation’s promotion of democratic ideals, through Japan’s demilitarisation, the enshrinement of equal rights for women, and agrarian reform that redistributed land from absentee landowners to tenants. This is made explicit in titles preceding the final scenes that state “The war is lost but freedom is restored”. Indeed, Kyoko Hirano (1992, 195) writes that “David Conde of CIE praised the film as the best among all those to which he gave guidance”. Hirano (1992, 189) suggests that Kurosawa’s search for an image that would seem true for this historical moment is an “image of shining youth”. This image was viewed as both independent of “the propaganda of the occupation government” and resonant of the future, emphasising the “freedom of learning” and the drama of youthful self-production, opposing idealism and weakness (190). Hirano suggests that “The poverty of prewar Japanese farmers is clearly contrasted in the film with the bright and hopeful images of the postwar village to which the heroine decides to dedicate herself at the end” (182). Nonetheless, this concluding image of rural Japan, featuring peasant villagers whose livelihood depends on farming rice, is a peculiar choice to signal the nation’s trajectory under the Occupation, and Rey Chow (2007) suggests this could signal Kurosawa’s ambivalence about wholesale or straightforward reconstruction. – Liam Grealy