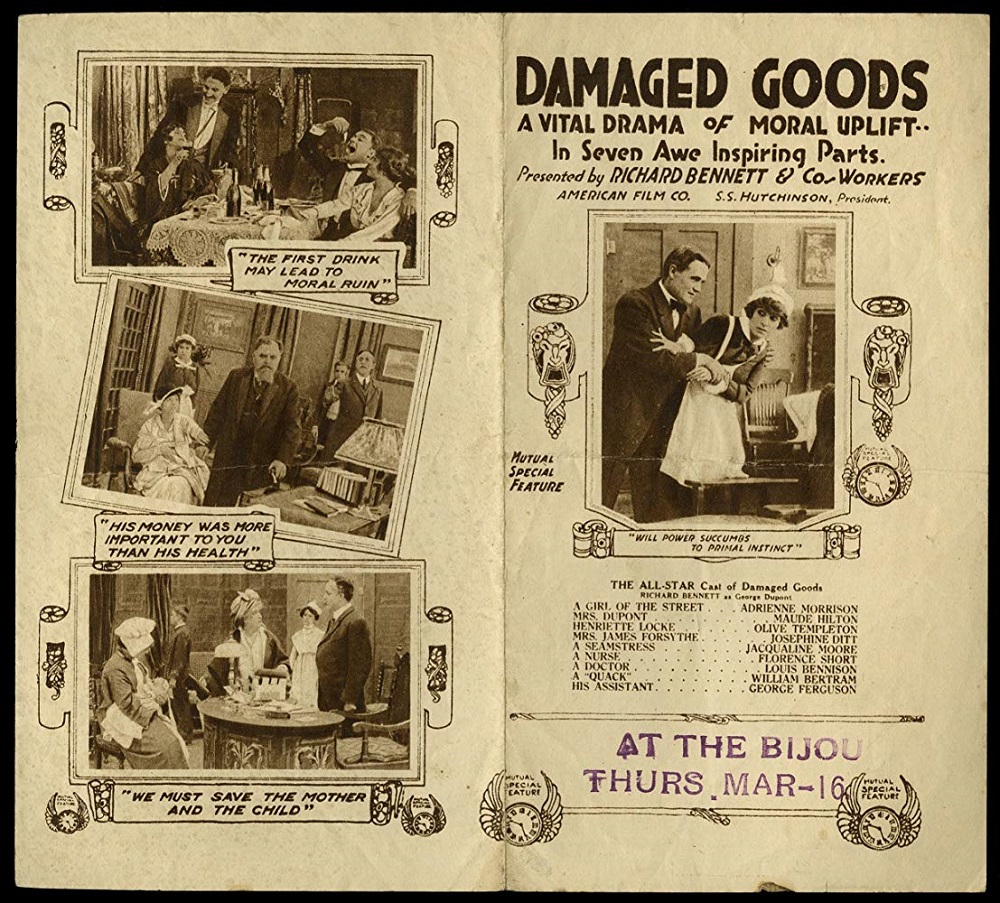 A significant film genre that was popular in the early 20th century depicted stories about the outcomes of sex, like unwanted pregnancy and venereal disease, typically within a narrative that reinforced moral behaviours. Although popular with audiences, “social hygiene” or “social hygiene propaganda” films made film censorship a more complex endeavour as they challenged how “obscenity” should be judged in film. Despite discussing sex, the films could also be  scientifically informative or otherwise socially beneficial. Early censorship processes in Australia consisted of reading a film’s synopsis provided by the film’s distributor, which made it difficult to make a decision about the tone of the film and whether content was portrayed in the “right” way. Initially, censorship authorities would often seek to ban such films; they could either register a film unconditionally, request eliminations of particular scenes or refuse to register a film altogether. Social hygiene films, however, were deemed to require further restrictions. Upon these films, censorship authorities could place special conditions that restricted audiences to over 16s or separated male from female audiences, for example.

Responding to state outcry for better censorship provisions, in 1917, a Commonwealth Board of Censors was established under the Customs (Cinematograph Films) Regulations. This stipulated that films could be banned from importation on the grounds that in the opinion of the Board:

(a) is blasphemous, indecent or obscene,
(b) is likely to be injurious to morality, or encourage or incite to crime, or
(c) is likely to be offensive to any Ally of Great Britain, or
(d) depicts any matter the exhibition of which is undesirable in the public interest

Film did not have the same recourse for ‘artistic merit’ as literature censorship of the time (‘”Damaged Goods” film’, 1920).

One such film about venereal disease, Damaged Goods (1919), is based on a Eugene Brieux play, and carries a social message about abstinence. The film depicts the story of George Dupont, a man of wealth and class, who is engaged to marry a woman equal in social stature, but before the wedding he pays for sex and contracts syphilis. As he does not want to delay his wedding, George seeks help from a doctor who advertises a fast cure. However, the doctor does not provide the proper treatment, and George unwittingly infects his wife and newborn child. After a period of estrangement, George seeks the correct treatment and the film shows him reunited in a happy ending with his wife and child (Kuhn, 1988, p59-60). In 1919, the Commonwealth Board of Censors passed the film, a decision the National Council of Women protested as they declared the film unfit for children. The Director of the Board of Health in Victoria attempted to prosecute an exhibitor for screening Damaged Goods in the state of Victoria, reverting to the old state laws – the Police Offences Act which specifically prohibited works dealing with venereal disease as under the terms of “obscenity”. Although the exhibitor was not charged when the film was found to be educational (‘”Damaged Goods” film…’, 1919), the case was reviewed in 1920 and the exhibitor prosecuted when Damaged Goods was found to be “indecent”, illustrating the difficult and controversial determinations related to this genre. The campaign against Damaged Goods also became a campaign for more robust film censorship in Victoria, in particular to protect children from immorality and implied sex on screen. – Rachel Cole

Notes: There were two versions of Damaged Goods made in this period – one produced in the U.S. by Richard Bennett in 1914 and a British remake in 1919. Although this post discusses the British version, the featured image is from the American production advertising sourced from IMDb, https://www.imdb.com/title/tt0003815/mediaviewer/rm2798132736